Algae occur naturally in ponds, lakes, rivers, and streams, growing in sunlight, warm temperatures, and the presence of nutrients (Watersheds Canada, 2016). Freshwater algae are unicellular microscopic plants that use photosynthesis to convert carbon dioxide, water, and sunlight into oxygen and chemical energy. Although functionally similar, algae are an evolutionarily diverse group of organisms with different classifications (Lowe & LaLiberte, 2017).

Are all algae bad? No! Although algae are sometimes referred to as “pond scum”, they play fundamentally important roles in all freshwater ecosystems. Algae are responsible for most of the photosynthesis in sun-lit streams and therefore are at the interface of the biological community and the physical-chemical environment (Lowe & LaLiberte, 2017). As the primary producers of oxygen and energy in aquatic ecosystems, algae form the base of the food web (Chapman, 2013). In addition to its use as a food source for many invertebrates, larger types of algae can also provide shelter for fish and other aquatic species (Watersheds Canada, 2016).

Algae are also essential for humans because they are at the base of the aquatic food web — from which many of our food sources arise — and provide us with air to breathe. In fact, through photosynthesis algae account for nearly half of the oxygen production on earth (Chapman, 2013)! Algae can also be utilized as water quality indicators for environmental monitoring (Lowe & LaLiberte, 2017). For example, benthic algae have short life cycles that result in a rapid response to shifts in environmental conditions (Lowe & LaLiberte, 2017). More recently, the sustainable applications of algae, including removing water pollutants, consuming carbon dioxide, producing biofuel, and its use in the pharmaceutical and agriculture industries are being investigated (Roy et al., 2022).

So how did algae get such a bad rap? Well, some algae species, though still important, can actually be very dangerous. For example, blue-green algae (or cyanobacteria) resemble bacteria and have the ability to produce potent toxins which can be harmful to humans and animals (Codd et al., 2017). An abundance of cyanobacteria can negatively impact the ecosystem biodiversity, drinking water supply, and aesthetic value and recreational use of the affected body of water due to health and safety concerns (Codd et al., 2017).

The common phrase, “too much of anything is bad”, also applies to algae! In excess, algae can trigger an algal bloom which can disrupt the natural balance of an ecosystem. During midsummer to fall when the ideal growing conditions for algae are accelerated and there is a considerable amount of nutrients present, algae can grow at a significant rate resulting in algal blooms (Watersheds Canada, 2016). Algal blooms can form a layer of “scum” on the water surface producing a distinct smell and changing the colour and clarity of the water (Watersheds Canada, 2016). 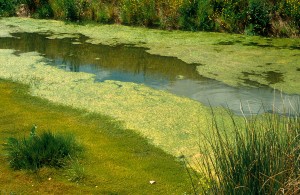 Algal blooms flourish due to a complex relationship between the physiological adaptations of the species, the environmental conditions, and interactions with coexisting organisms (Glibert & Burford, 2017). Nutrient enrichment of water, specifically by nitrates and phosphates, accelerates algae growth leading to algal blooms that may alter the water quality (Egan, 2014). Algal blooms may have harmful effects such as oxygen depletion of the water, fish toxicity, and mechanical interference with filter feeding by bivalve molluscs and fish (Glibert & Burford, 2017). The rising increase in nutrient pollution is due to numerous factors including the increase in human population, increased use of fertilizers for agriculture, higher demand for meat production leading to more animal waste, and expanding aquaculture industries (Glibert & Burford, 2017). Additionally, increased nutrient discharge has resulted from increased habitation and landscape development along the shoreline (Egan, 2014). Sewage discharge and increased storm water runoff can also contribute to the accumulation of nutrients beyond the lake’s capacity to utilize the nutrients resulting in excess algae growth (Egan, 2014).

Remember not all algae are bad! Although accelerated algae growth can lead to harmful algal blooms, naturally occurring algae are essential for life. I wonder if we should rethink the nickname “pond scum” and appreciate all that algae does for us and our freshwater ecosystems!

This blog is part of a five-part series generously funded under the Great Lakes Protection Initiative – Areas of Concern (AOC) Program by Environment and Climate Change Canada. This three-year project will support important shoreline restoration in the St. Lawrence River AOC through the Natural Edge Program, and is being delivered by Watersheds Canada, Mohawk Council of Akwesasne, River Institute, Great River Network, and Raisin Region Conservation Authority.